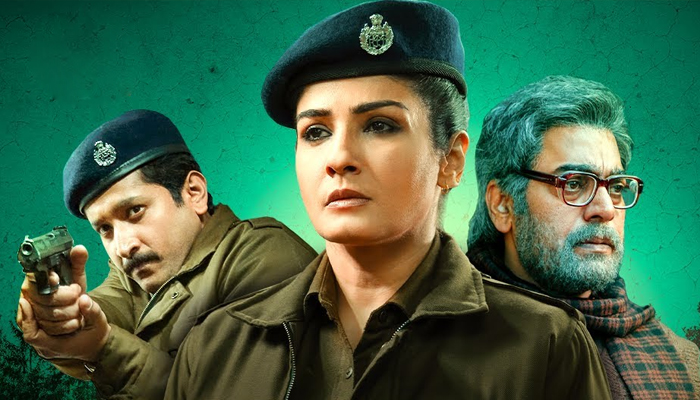 Aranyak is an Indian web series streaming on Netflix from December 10, 2021. Furthermore, Bluffmaster and Dum Maaro Dum fame Rohan Sippy serves as its creator. While Vinay Waikul acts as the director and Charudutt Acharya pens down the story. In addition, the ensemble cast includes digital debutant Raveena Tandon, Parambrata Chatterjee, Ashutosh Rana, Meghna Malik, Zakir Hussain, and Indraneil Sengupta. Lastly, the action-crime-thriller is available in both Hindi and English languages.

The plot revolves around a local cop Kasturi (Raveena). When a foreign teenage tourist goes missing in a town (Sironah), Kasturi should work with Angad on a major case that leads them to skeletons, strange myths, and other suspicious entities present in the forest.

Netflix’s Aranyak is a one-of-a-kind experience, a blend of a good story and an amusing thriller. Furthermore, it will keep you on the edge of your seat till the very last minute of the series. Talking about the performances, Raveena and Parambrata steal the show. They nailed their roles immaculately. Moreover, Ashutosh Rana makes a substantial contribution. Besides them, supporting cast involving Meghna Malik, Zakir Hussain, and others play their characters pretty well. Director Vinay does all justice to his job. All in all, Aranyak is a highly propulsive suspense-thriller.