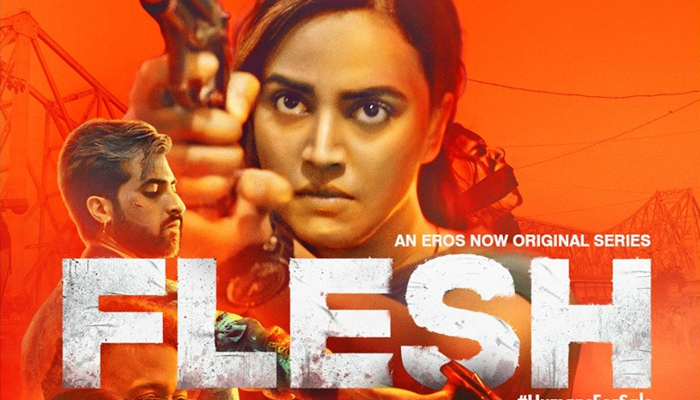 Flesh is the Hindi-crime-drama show that hits the OTT platform, Eros Now on August 21, 2020.  The versatile Swara Bhaskar is playing the lead role as a cop. Directed by Danish Aslam, it is produced by Siddharth Anand and Mamta Anand. Furthermore, Eros-Now-Chief-Of-Content Ridhima Lulla performs brilliant editing of the content. Also, the music composers Manas Chaturvedi and Shikhar Chaturvedi render strong and passionate music to the web series. Lastly, Pooja Ladha Surti has written the splendid subject of ‘Flesh’.

‘Flesh’ focusses on human trafficking. Moreover, the show essays a brutal story of smuggling and displays the harsh reality of human trafficking, with a radically distinctive blend of drama and thriller. In short, Flesh is the intricate tale of two girls who struggle to survive the ordeal of being victims of the physical trade and human trafficking industry of India.

Flesh, a gritty trailer peeps into the hard-hitting and dark criminal world where humans are on sale. Swara Bhaskar is a police officer who pledges her life to unfold the mystery of missing girls. Furthermore, Akshay Oberoi portrays a strong, compelling role with a character full of complexities. Thus, it reveals a powerful chase of a cop to reach the accused. While on the hunt, she encounters a deep and dark web of political and legal involvement.

The show has one season with eight episodes in total to watch. Also, the average running time per episode is 40 minutes.

Flesh reminds you of Rani Mukherjee’s Mardaani. However, the former turns out to be edgier and grappling. In addition, it is an eye-opener crime-thriller, highlighting the facinorous racket of human trafficking. Moreover, it displays anger, conflict, greed, and inequality. Besides Swara’s bang-on performance, Akshay Oberoi made a remarkable contribution. Yudhistor, Vidya Malvade, and Mahima Makwana played their respective roles well. All in all, Flesh is an Eros Now flagship series, it has all the essential elements to keep the viewers hooked.

Jupiter Legacy: Walk into the Magnificent World of Supernatural Powers
Chutzpah: Exploring Naughtier Side of Digital Era
Feels Like Ishq: All About Love, Emotions, Sentiments & Friendships
Chakravyuh: Get Trapped into the Mysteriously Dark Web